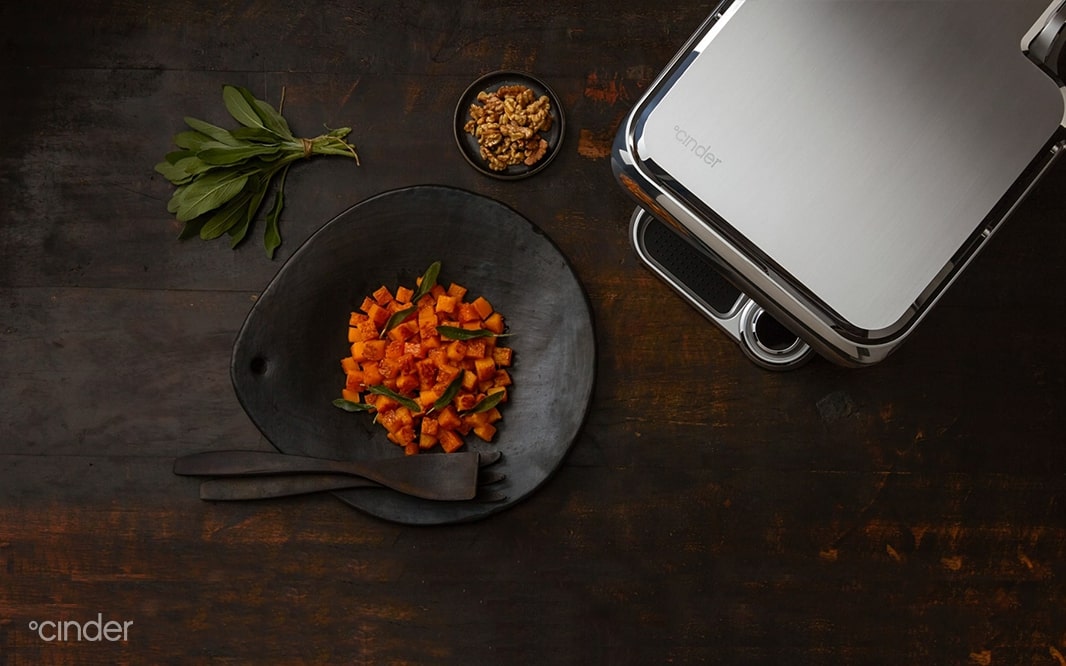 Desora is a cookware company with multiple consumer-facing product lines. After acquiring Cinder Grill, a successful crowd-funded product which ceased operations due to lack of logistical expertise, Desora sought to relaunch the product with a new brand campaign and creative direction.

After acquiring the assets of a well-publicized, precision countertop grill (covered in TechCrunch, Wired, & Gizmodo) that launched on IndieGoGo‘s crowdfunding platform, our client (“Desora Inc.”) sought to re-establish the battered brand which itself, carried some “baggage.”  While the Cinder group had been a YCombinator startup, it endured some suffering after difficulties with logistical management and a lack of industry-expertise led Cinder to cease operations despite its early success.

The company that launched Cinder, Palate Home, had extensive product development expertise, but the lack of consumer kitchen-industry expertise proved formidable for the young cookware company. In contrast, our client had extensive industry-experience with prior products, and was well-positioned to relaunch the product if it could successfully turnaround the embattled brand. Desora swept in and bought all of Cinder, aiming to fulfill orders for every IndieGoGo backer and show the world what Cinder could do.

The Product: Grill vs. Grill

The Cinder Grill is a product in its own class: part traditional countertop grill, part Sous Vide precision cooking. Using finely controlled tubular coils, the grill’s sensor automatically adjusts temperature to evenly heat the surface; akin to an array of LEDs adjusting brightness in your TV dynamically to present the intended image. This enables Cinder to achieve 1-degree precision across the entire surface, resulting in an evenly-heated, perfect cook. Ordinary countertop grills, by contrast, are wildly irregular with temperature varying significantly from the traditional flame element heating surfaces unevenly.

The Product: Simple vs. Sous Vide

The Sous Vide method is often used for precision cooking, with popular brands like Anova breaking into the consumer market. Sous Vide, however, is a cumbersome and difficult cooking method that requires vacuum-sealed bags, water suspension, and significant cleanup effort. Without a need for additional equipment or extensive cooking-expertise, Cinder offered the same levels of precision as Sous Vide methods in a more accessible package for consumers that carried far less hassle in the process.

The Product: Cinder vs. The World

In contrast with traditional grills, Cinder offered far more precision with none of the grease and smoky mess. Compared to Sous Vide appliances, Cinder could cook, reheat, and sear with the same consistency and none of the extensive prep, technical knowledge, and cleanup process required.

Offering a completely effortless cooking process that eliminated the oil spatter mess of grills and the baggage carried by Sous Vide, Cinder found the perfect recipe for a product that was truly in a class of its own.

“Offering a completely effortless cooking process that eliminated the oil spatter mess of grills and the baggage carried by Sous Vide, Cinder managed to provide the perfect recipe for a product that was truly in a class of its own.”

With an emphasis on innovation, Cinder was truly a “best of both worlds” situation. However, while a “new class” of product might be fantastic for innovation, it can often prove challenging from a marketing perspective. The client encountered strategic difficulty in finding the right way to market the brand and had requested a punchy new marketing campaign that would both differentiate its product line from Sous Vide cooking methods while also comparing it closely to avoid being “typecast” as simply another grill.

Consumers had just begun to accept the proliferation of Sous Vide appliances, adding another new category of cookware on top of all the new smart appliances could risk it being ignored. Yet, attempting to market the product as simply a “better grill” would not allow it the differentiation it both needed to thrive and deserved for all its innovation.

At its core, the Cinder Grill was not only a fundamentally new category in cookware products, it was an entirely new method of cooking, as well. The precision of Sous Vide, the ease and simplicity of a traditional grill (not to mention the ability to generate a perfect sear), Cinder stood apart from all competitors. Without “leaning on” them, however, explaining Cinder make it appear complicated, unruly, or unworthy of early adoption. The explosion in the Sous Vide market made this apparent.

In order to garner widespread adoption, it would be essential to utilize this new trend as an advantage, rather than straying too far from what consumers know and are familiar with. Our goal was to “thread the needle,” differentiating through measured comparison that kept competitors at arms length. We began exploring ways to help “anchor” the product tangibly in the mind of its audience through the comparative methods, while also differentiating it from the downsides of either method.

Sous Vide may be the gold standard in quality, but it is a hassle: vacuum-sealed bags, water baths, pots, pans, and appliances galore. It’s great but it comes with a lot of baggage… which led us to the following campaign:

After launch, brand interaction across all social channels increased. The brand went from having a few hundreds of thousands of followers to over a million in just a few months.

The product, “Cinder,” is a smart countertop grill with extremely precise temperature control & even heating-system, capable of cooking food within 1° of the target temperature. It straddled the market between traditional pan-cooking (which utilizes heating coils or gas, producing uneven heat dispersion) and the Sous Vide method (widely-considered the “gold standard” in cooking quality and precision) which utilizes vacuum-sealed plastic containers to hold food in place as it is submerged in a boiling water bath.